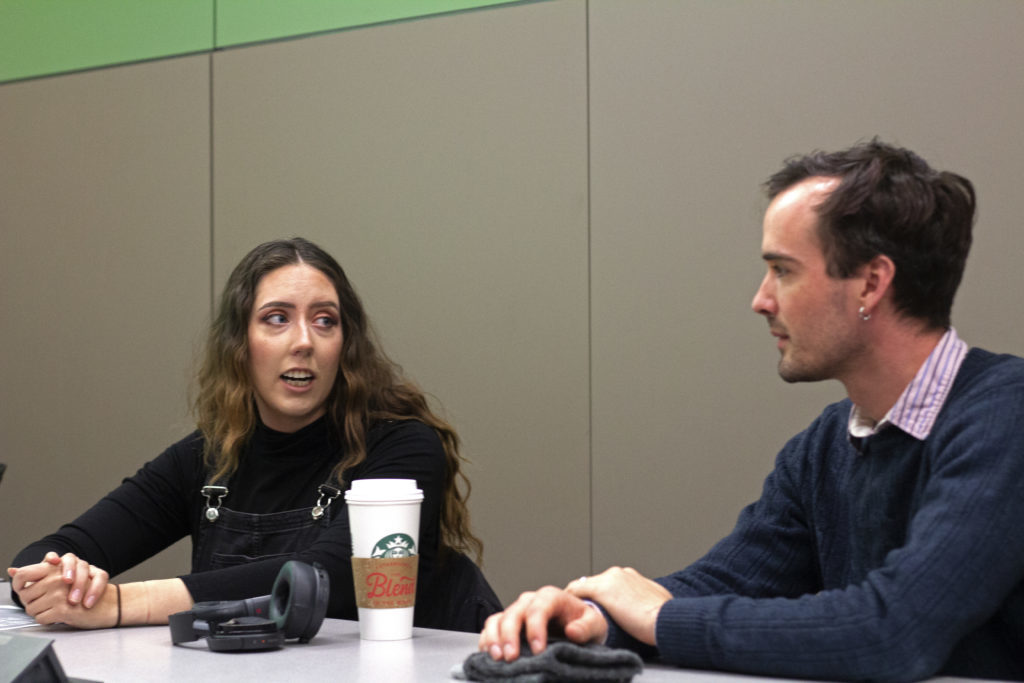 The recently founded UNT chapter of the Secular Student Alliance, which intends to fill a void for atheist students who feel underrepresented on campus, covers topics related to atheism including separation of church and state or street epistemology in their meeting and plan on increasing their visibility this semester.

“I wanted to see if there were any groups dedicated to atheist students, and when I wasn’t able to find one I saw the need to step up and get the group going,” Shelley said. “I think it’s important for the university to have a space for people with secular viewpoints to converse openly with others of similar beliefs.”

Most of the 10 members said they were seeking out a place at UNT for people with beliefs similar to their own.

“One day, I started searching for a secular group at UNT and couldn’t find one,” Taliaferro said. “So I started applying to the [Secular Student Alliance] to see if we could make one. I heard back from them the next day, telling me that Madison had began trying to start the group literally three or four days before I looked it up.”

The Secular Student Alliance is a national nonprofit organization with approximately 304 chapters at both an high school and college level. The alliance “empowers secular students to proudly express their identity, build welcoming communities, promote secular values, and set a course for lifelong activism,” according to their website.

As part of their efforts to increase involvement this semester, the group plans to incorporate street epistemology—the study or a theory of the nature and grounds of knowledge especially with reference to its limits and validity—around campus and set up a table alongside other organizations.

“We want to abolish the negative connotations and stereotypes often associated with atheists and we are also looking into volunteer events to give back to the community,” Shelley said. “In the future, we’re hoping to establish a lecture series and possibly even facilitate a debate here at the university.”

With approximately 36 religious groups on campus, the Secular Student Alliance members said they felt UNT did not have a place for people with similar ideologies.

Marketing junior Will Boss said he recalled not being able to join groups based on his beliefs.

“[I’ve been] at the school for two years now [and seen] a lot of other religious campus organizations have huge events that go on on campus,” Boss said. “They have a bunch of events and a lot of members and I just remember thinking that’s something I can’t, in good conscience, be a part of. I wished there was some kind of group that had ideals that lined up with my own.”

Last semester, the group discussed looking into volunteer events to give back to the community, throwing Secular Student Alliance based events and potentially establishing a lecture series as well as facilitating a structured debate at the university.

“We are officially recognized as an organization by the National SSA,” Shelley said. “We are still working to become an official student organization here at UNT. The only thing we lack is a faculty adviser.”

Despite not being an official university organization yet, Shelley said the group plans to use their resources and connections to the national group to develop a sustaining atheist organization that lasts at the university after they have all graduated.

“Ensuring continuity is a difficult task for any organization, but we want to try our best to grow our presence on campus because the more members we have, the more of a chance we have to keep the program going,” Shelley said. “A lot of the time people are hesitant to come forward as an atheist because they don’t want to be labeled or misrepresented, so if we show that it’s perfectly normal to be secular, hopefully they will feel comfortable enough to be open about their atheism.”