This article originally appeared in the Trinitonian on November 5, 2018. 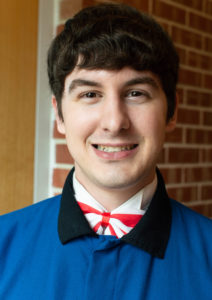 The TU Secular Student Alliance is being formed in Trinity University as a way to help students understand what it means to be non-religious and allows for secular students to have a presence on campus.

According to junior Alex Bradley, club president, TU Secular Student Alliance aims to provide a place for students to discuss what it means to not believe in a religion and allow students to be more comfortable with their identity in the community.

Bradley noticed that there was no club that supports secular students and decided over the summer to create the club himself.

“It was a lot easier than I anticipated. I just made sure I had all the papers,” Bradley said.

Bradley aims to discuss epistemology and religious beliefs so that the members of the club can have a well rounded perspective. Bradley also mentioned that the club will potentially invite speakers to further expand members’ perspectives and regularly volunteer for community service. The TU Secular Student Alliance will focus on speaking to religious groups as well as interested students to inform them about what it means to be non-religious.

“I would like to make [the secular students] more visible so that they are more comfortable with their beliefs and have a place to discuss their beliefs freely,” Bradley said.

He has also contacted the national Secular Student Association and has applied as a representative group. According to Bradley, his actions will further legitimize the group’s initiative and allow the group to expand.

Lauren Turek, a professor in the Department of History and club adviser to the TU Secular Student Alliance, emphasized the importance and impact of having a group that helps promote diversity of thought and belief.

Kirsten Timco, a junior who is involved with the TU Secular Student Alliance, said that the formation of this student group allows for more freedom of dialogue in both political and intellectual conversation.

“Trinity has a gracious free speech policy, which I am personally grateful for, and I think the Secular Student Alliance wants to take advantage of this policy while providing a constant variable for grounds of discussion,” Timco wrote in an email.

Timco also believes that the club will benefit the Trinity community.

“In terms of benefits, I think membership provides a ‘safe space,’ if you will, for anyone and everyone to participate in judgement-free discussions,” Timco wrote.

“We also created the group to assist other organizations on campus and nonprofits in the San Antonio area; these are goals that the national [Secular Student Alliance] set, and we are more than happy to oblige.”