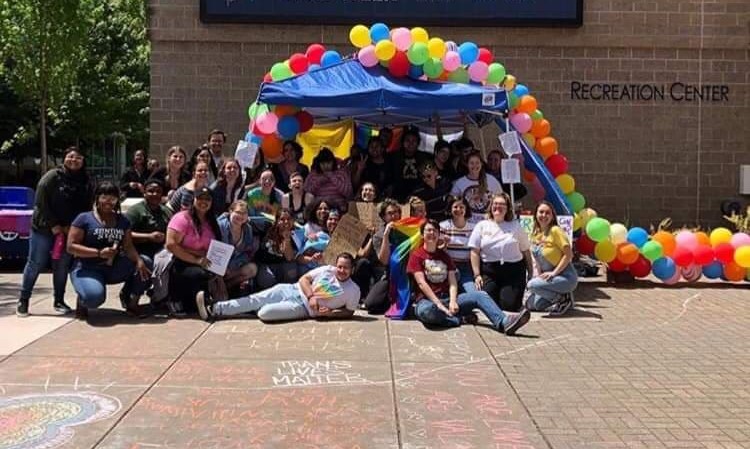 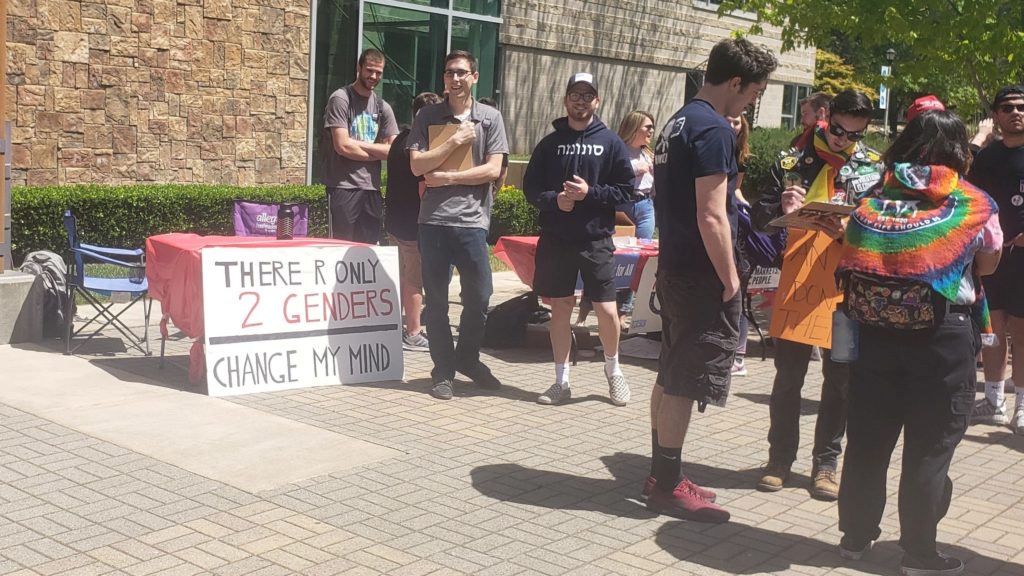 Turning Point USA, a national organization represented on over 1000 campuses in the country, is a conservative political action organization. The TPUSA chapter at Sonoma State University has been mostly inactive until recently. In April, they began advertising for a tabling event: “There Are Only Two Genders; Change My Mind.” They advertised this saying “Grab Your Pitchforks!” (SSU Reddit), it’s “going to be entertaining to watch,” (TPUSA of SSU Newsletter), and that the event was “in part to drum up interest in the speaker,”(Newsletter). The speaker, Hayden Williams, is famous for making claims that police brutality isn’t racist, as well as being punched on the UC Berkeley campus. This speaker event was planned for the same time as Sonoma State’s Black Student Union Meeting, in adjacent rooms.

Sonoma State’s Queer Student Alliance and HUB (Multicultural Center) teamed up to plan a response. In a statement released by the QSA Board of Directors, they reminded students that the “very goal that this group hopes to achieve is violence and controversy by way of emotional compromisation” and recommended that there be no interaction with the TPUSA table or members.

Instead, students were encouraged to channel their anger and frustration into support and love for their fellow marginalized students. Kristen Reynolds, former Race and Ethnicity Coordinator at the HUB (recently moved to UC Davis) presented the idea of an “All-Gender Dance Party” at the same time, same day, and same place as the Turning Point USA tabling event. QSA helped to plan and promote this, along with the Black Student Union and Greek organization Lambda Sigma Gamma. The day of the “All-Gender Dance Party” (and the day of Turning Point’s tabling event), clubs in support of the dance set up tables, united as one long line decked out with flags, candy, balloons, stickers, and information. Our Secular Student Alliance chapter, Secular Seawolves, were among those tabling. The day turned out a great success. QSA blasted upbeat tunes on speakers.

Chalk was available, and people drew and wrote supportive messages on the ground in the quad. One club brought jump rope games. Two LGBTQ support organizations from Santa Rosa, the neighboring city, came and handed out their information and resources. The atmosphere was lively, colorful, and supportive. Some people that attended even forgot that Turning Point was there; all the focus was on love and acceptance.

Our club promotes rational discussion; we try to listen to people when there is mutual respect and the chance for an open-minded conversation. However, Turning Point USA made it clear that they didn’t want to actually have somebody ‘change their minds’. Ultimately, the Turning Point USA members tabling left early, and they canceled the Hayden Williams appearance on campus (although they did hire a less controversial speaker to replace him at the event). This dance party turned out to be a great success. Most importantly, it allowed marginalized communities to feel supported, loved, and defended, and it happened without any direct conflict, shouting matches, or fighting. We at Secular Seawolves are proud of our fellow Sonoma State students and aim to continue spreading messages of unity, love, and acceptance in the face of adversity.

Editors: Our previous post didn’t have all the details of the story. It has been replaced in its entirety with this story, written by Elliott Pickett, a member of Secular Seawolves at Sonoma State University. We are grateful to our students at SSU for their engagement on this issue and for the story and photos here.