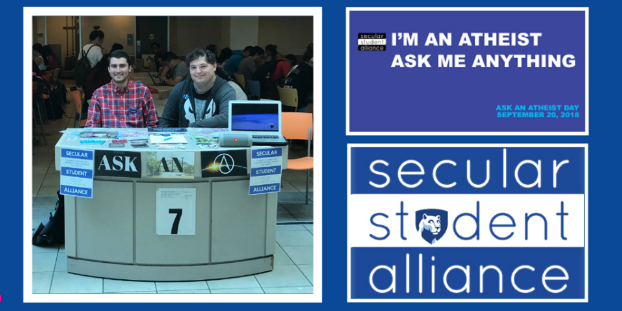 A few weeks ago dozens of SSA chapters participated in Ask An Atheist Day on their campuses. From the University of Alaska Fairbanks to Penn State University to the University of Puerto Rico and all the states in between students engaging in conversations with believers and non-believers alike. Most set up tables on campus and invited passers by to ask them anything. SSA students were ready and eager to answer some of the most pressing questions and dispel stereotypes around atheism and secularism. We asked our students how they felt about the event and to share with us some of their most memorable interactions.

Ryan Insley from Penn State University explained why AAAD mattered to his chapter: “We were interested in participating because we wanted to engage with students of all religious or secular affiliations, we wanted to show members of the secular community that they have a voice on campus, and we wanted to give secular students a chance to learn about our chapter.” This was Insley’s first time leading an openly secular event and discussion which granted him some meaningful moments not only for his chapter but also for himself. After being personally asked if his life has been better since becoming secular, Insley proudly answered, “I think my life is better… I no longer feel limited to seeing the world through a singular lens of certain scriptures from one religious lineage. I am free to think and engage more widely and develop my understanding of truth based on evidence, reason, and deliberation.”

The president of the Jacksonville State University chapter, Noah Davis, took a minute to describe exactly how his chapter celebrated Ask An Atheist Day and why they did it.

“To encourage longer dialogue we decided to hold a reception at the building of the Wesley Foundation on campus. We had cake and lemonade and our members sat one at a table and answered questions. We had 20-30 people come to engage with us”.

Jacksonville had missed Ask An Atheist Day in the past but made sure to not miss the opportunity this time around where their members got to openly share their different worldviews. Davis also explained his favorite moment from Ask An Atheist Day: “To me the most important question I got was ‘Why be an atheist and not agnostic?’. This question is important to me because both of those terms are not understood clearly. Most of our members are agnostic atheists and I think the idea that most theists have about agnosticism is that it is somehow closer to theism than atheism”. Davis realized that by clarifying these concepts it led his chapter to understanding the bigger picture. “I think people properly understanding our terminology is the biggest win we can have long term,” Davis said.

Ask An Atheist Day presents a bi-annual opportunity to students to express their identities and opinions to those courageous enough to ask. What is more, some chapters were so inspired that they continue to encourage open conversation not only when it is nationally celebrated but also during meetings, tabling, and other student-led events. The next Ask An Atheist Day is on April 18 and we’re again looking forward to the creative ways our students will participate.