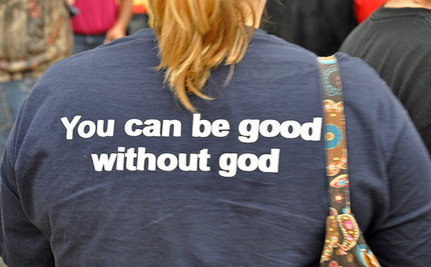 A lively exchange about moral philosophy took place in the Missouri State University newspaper, The Standard, last month, where SSA student, Dalton McCart stood up for ethical atheism in a letter to the editor.

The back and forth began when a columnist for the paper, Isaac Demotta, wrote a column provocatively titled, “Subjectivism and atheism lead to ugly conclusions.” Demota begins by attacking moral subjectivism, but about halfway through his column he gets to his main point.

Now, I want to look at what I believe is the origin of subjectivism.

I think it began when God was cut out of modern society. If space, time, matter and energy came from nothing, if life came from non-life, and if human beings are but chemical results of random chance and processes, then of course morality does not exist. And along with it goes value and purpose.

The claim, that atheism leads to moral nihilism is not new, and if you’ve been an atheist or a non-theist for any length of time, you’ve probably encountered it.

As the incoming president of the SSA chapter at Missouri State, Dalton McCart was not going to take this lying down. He decided to write a letter to the editor entitled, “It’s OK to be good without God,” sharing his perspective as an atheist who has spent considerable time pondering these questions. McCart begins with the Euthyphro Dilemma, writing

The Euthyphro Dilemma is an old question that asks about the root of good in the universe. The E.D. asks if god(s) commands what is morally good because it is morally good, or is it morally good because god(s) commands it? This boils down to if morality is entirely based on god’s religious authority then it is within god’s ability to turn evil into good and it would be objectively good. For example, if god declares that murder is good, it would then be the only moral option to murder. To refuse to do so would make the offender immoral. This means morality is based on god’s whim and therefore arbitrary, not eternal and unchanging. The other side is morality is fixed and in that case god’s authority must agree with what is good or god is not moral.

He concludes by noting that “it is reasonable for people of any faith, or lack thereof, to be moral and to have a purpose. Atheism is a claim about the belief in the existence of god(s)…. Regardless of where one believes morality comes from, it is insensitive to claim that others do not have the capacity for morality or purpose in life without one specific view. Billions of people around the world have a different view on religion than the author and are equally capable of morality.”

Demotta responded once more, but McCart did his campus community a great service by articulating a viewpoint that many on campus feel but might not have been able to articulate. We congratulate McCart for getting his opinion published and encourage all SSA students to use the press to express  your views as often as you are able.