The cover story of The Humanist (Sept/Oct 2019) is about the Secular Student Alliance. We excerpt a portion here. Read the story in it’s entirety at TheHumanist.com. 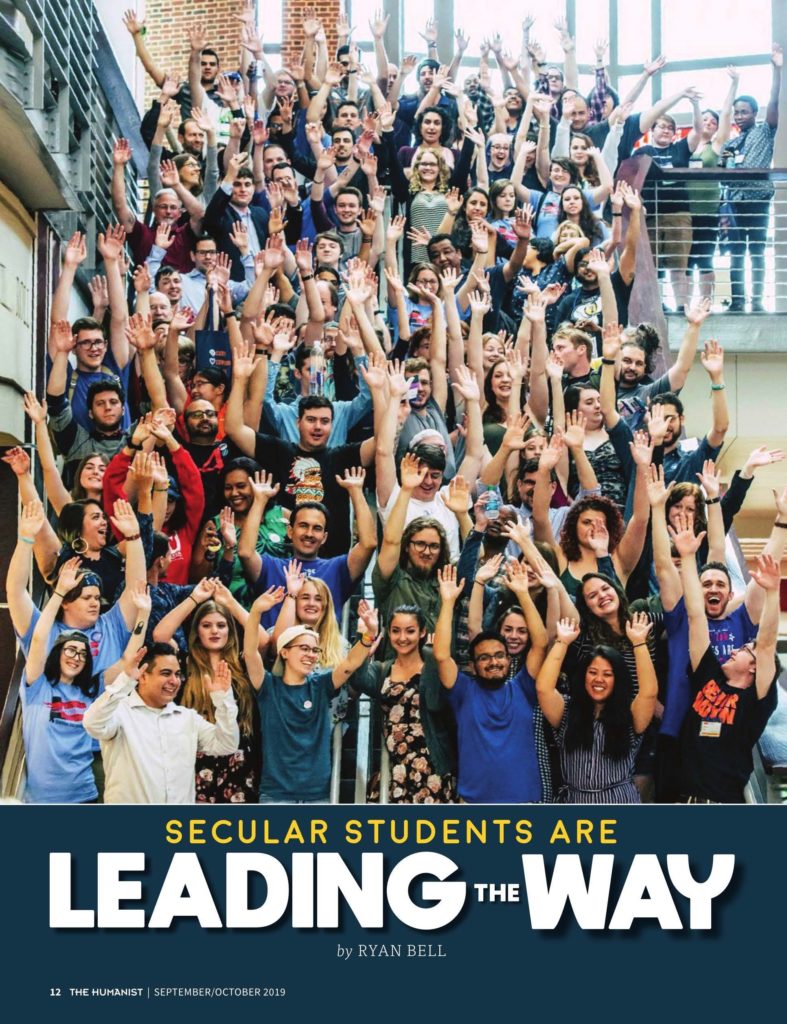 IN MY CAPACITY as the national organizing manager for the Secular Student Alliance, I’ve had the opportunity to meet thousands of students across the country who eschew religious belief or a religious identity but who are seeking like minds and a sense of community.

I first met Sophia (a pseudonym used at her request) at “Sunday Dinner,” the bi-weekly meal that the Secular Student Fellowship (SSF) hosts at the University of Southern California during the academic year. SSF is the USC chapter of the Secular Student Alliance (SSA). They typically have a topic for table discussions and a homecooked vegan meal that is open to everyone. Toward the beginning of the semester the room reaches its capacity with as many as fifty students in attendance. After meeting her briefly at two or three dinners, I invited Sophia to get coffee with me so I could learn more about her story and see what made the Secular Student Fellowship a place she wanted to be.

I learned that Sophia was raised in the Northeast of the United States in a Catholic family. Though the family was religious and Sophia grew up going to church, they didn’t attend every week, and, like many American Catholics, they weren’t strictly observant of the church’s teachings. As a result Sophia never felt compelled to attend church as she grew up. When her personal choices conflicted with archaic church teaching, she felt no qualms about going her own way. When she got to USC, she was excited about the remarkable opportunities at her fingertips but struggled, as many do, to find her group and fit in. One day someone suggested she might like to attend one of the SSF meetings. What she found was a group of thoughtful, open-minded, generous students who were having the conversations that she most wanted to have. Sophia joined SSF not because she was especially frustrated with religion, but because she had found a group of people who cared about the things she cared about and who were engaged in exploring the values and the life choices they each wanted to make.

Noah is another student I’ve had the privilege of working with. He’s a junior at Jacksonville State University in Alabama and has been a leader in his SSA chapter for the past three years. Noah grew up in a Southern Baptist household not far from where he attends school. At some point during middle school, when a few of his friends started coming out as gay or lesbian, he wrestled with his church’s teaching that his friends were destined for eternal damnation. After a long struggle, he finally decided he could no longer be a Christian.

Noah has been instrumental in putting on an annual drag show to raise funds for The Magic City Acceptance Center in Birmingham. “There are few places in the US where it is harder to be a LGBTQ youth,” Noah told me recently. “Our club sees the need. We help and support queer students on campus and are listed by the university as an LGBTQ resource.” For this and other examples of courageous leadership, Noah was recently awarded the 2019 SSA Distinguished Leadership Award.

Secular students are as different from each other as you would expect of any subpopulation of students. Some are passionate firebrand atheists, others are curious agnostics, others are powerful activists, and still others are compassionate community builders. Most are some combination of these, and more. But regardless of the variety, one thing is clear: the number of high school and college-aged young people who do not adhere to any religion is growing quickly. According to a 2016 study by the DC-based Public Religion Research Institute, 39 percent of Americans aged eighteen to twenty-nine are “nones.”