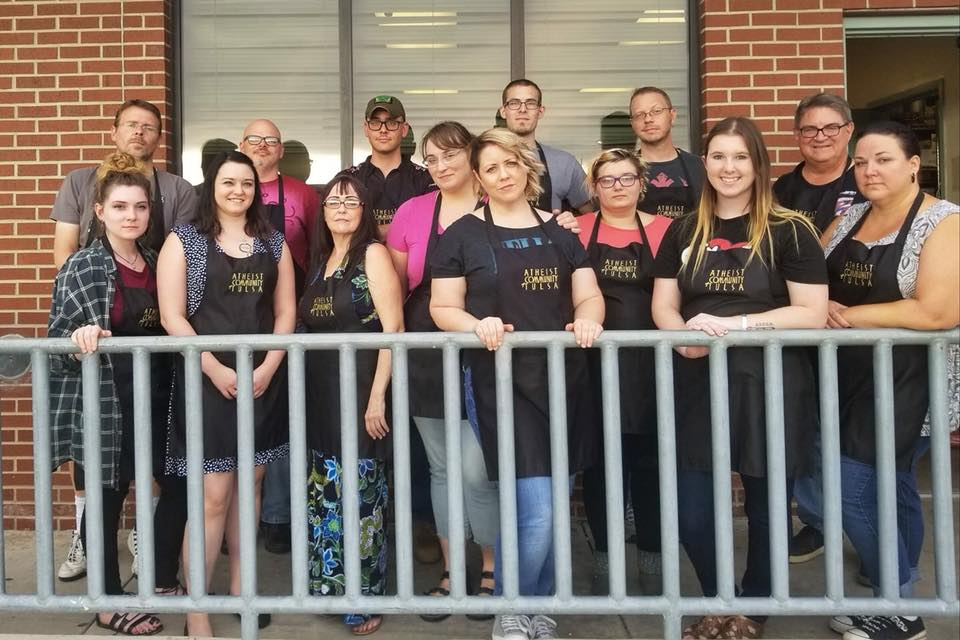 Jennifer Stemmer (front row, second from right) and her new SSA chapter partnered with the Atheist Community of Tulsa to serve a meal at a homeless day center.

Rogers State University (RSU) has just officially recognized one of the newest Secular Student Alliance chapters, led by Jennifer Stemmer. Jennifer and one of her group members, Bri Petree, recently partnered with the Atheist Community of Tulsa (ACT) to volunteer at The Tulsa Day Center for the Homeless.

“I was not expecting to have as much fun as I did,” says Stemmer. “Many members of ACT cooked spaghetti, green beans, garlic bread, and cupcakes and brought them to the center for other members, including me, to serve. Once everybody started going through the line, it was common for people to say ‘God bless’ or to ask which church we were with. The president of ACT, Amanda Baggett, would always very politely tell them that we were with the Atheist Community of Tulsa. The response was almost always the same: ‘Wait, you don’t believe in a god? Yet you’re here feeding the homeless?’ People were absolutely baffled by the fact that somebody without a god telling them what was right and wrong would be out doing great things for the community.”

“We are not here to try and convert people or to demonize the campus, but merely to welcome skeptical or questioning students and give them a safe place and a great community.”

Volunteering and community outreach are important values that Stemmer plans to continuously demonstrate with her new group. When asked what it was like to work with the Atheist Community of Tulsa, Stemmer said, “While I am quite active in the social media aspect of ACT, this was the first event that I was able to attend. Everybody was incredibly welcoming and it seemed so genuine: they were truly happy to have a community of like-minded people who were willing to go out and better the world, or at least the city. I never felt judged, only loved and accepted.” She aims to focus on “slowly changing the negative societal connotation of the word ‘atheist’ and anything else that falls under the non-religious category,’ through her SSA chapter. As Stemmer continues to build a strong foundation of secularism at Rogers State University, she also mentioned that her SSA chapter had decided to work with many of the religious organizations on campus to “show that we are not here to try and convert people or to demonize the campus, but merely to welcome skeptical or questioning students and give them a safe place and a great community.”