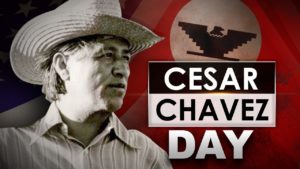 Let Cesar Chavez Day, on March 31, be a day of community service to respect the work of Cesar and Dolores.

For someone whose family described as an ordinary man, Cesar Chavez has set the bar high and left an immense legacy for modern-day activists to follow. Born in Arizona, Chavez saw the plight of agricultural workers and dedicated his entire life to the reformation of working conditions for these farmers. The Mexican-American civil rights activist and leader was famous for organizing non-violent protests in the form of hunger strikes, marches, and boycotts.

He co-founded the United Farm Workers (formerly the National Farm Workers Association) with Dolores Huerta, who is a union leader and civil rights advocate in her own right. Huerta lobbied for better working conditions and benefits for local farmers and non-US migrant workers. On top of that, Huerta also fought segregation, police brutality, and racial discrimination.