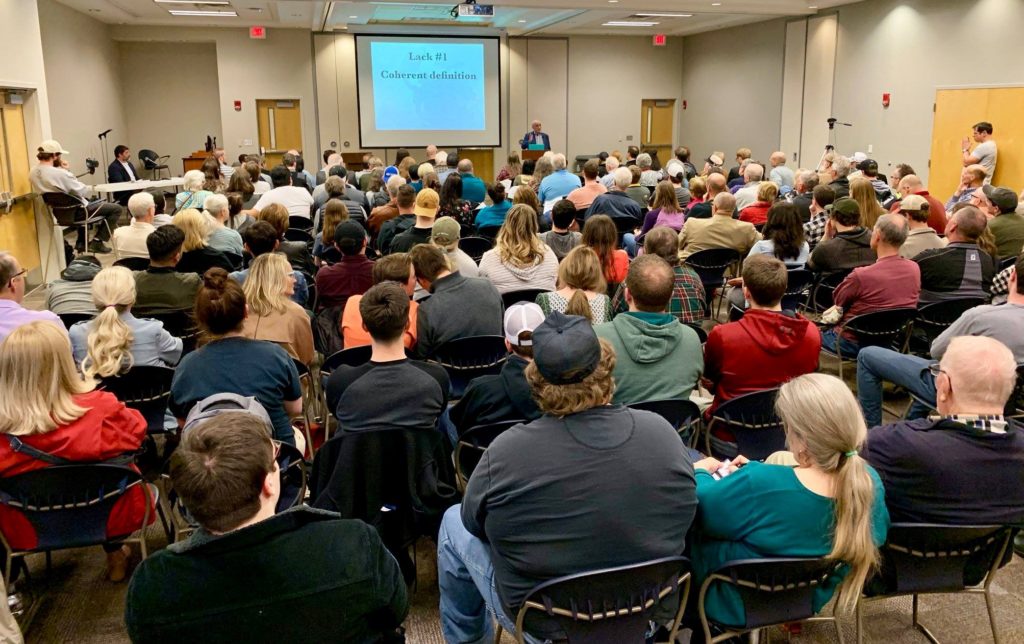 Dan Barker, co-president from the Freedom From Religion Foundation (FFRF) shared his secular point of view and displayed his debate skills by embarking on a speaking tour to eleven SSA chapters across the country this spring semester. His talks ranged from how to be good without god, the importance of the separation of church & state, and debating with christian apologists. Our students have put in the time and effort to host Dan and demonstrated their leadership capabilities as secular students. They are not only educating themselves with Dan’s talks but are also allowing the rest of the community to understand their secularism and activism through these discussions.

The University of North Georgia event (pictured) raised the standard for SSA-sponsored debates. Turnout for the event was phenomenal with over 100 guests. Students and local community members alike were brought together to hear Dan debate the existence of God. The event was such a success that the University of North Georgia’s Dean of Students is going to nominate their event for the Best Collaborative Event of the Year at the Blue and Gold Awards!

At the University of Texas, Arlington (UTA), Charlee Vance, our chapter president, was thrilled to have Dan come out and lead their weekly discussion. Charlee explained how hostile the atmosphere of the event was getting when an audience member asked about Dan’s position on abortion. She explained how the question began to stir up a vigorous but productive debate within the audience. “The non-secular guests said they were impressed with our group and [how we tried] to keep the event friendly for everyone,” exclaimed Vance. Secular Mavericks of UTA were praised for their professionalism by non-religious and religious audience members alike. By having Dan Barker as a speaker, the Secular Mavericks were also able to practice resolve conflict situations.

At every campus where Dan spoke, students left his talk or debate feeling inspired, informed, and empowered to take on new discussions about their atheist experience and morality. Hundreds of students felt the impact of Dan’s personal journey. Learning how to be good without god is a question our students wrestle with constantly and that many in the community were interested in hearing about. As evidenced by the high turnout of each event, the Secular Student Alliance student leaders from across the country should be applauded for the work they put in hosting the biggest, baddest, best “damned” event on campus!