Put your values into action by helping your community.

This year, we are happy to offer a secular spring break experience on March 14-19.  If you are interested in being a part of this life-changing experience, please register your interest below. 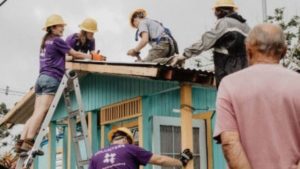 In 2019 and 2020 we partnered with All Hands and Hearts disaster relief efforts in Puerto Rico and the Abaco Islands in the Bahamas to rebuild homes and communities devastated by hurricanes.

If you would like to support students in carrying out this project you can make a tax-deductible donation on our website.

We are now accepting SSA student members and advocates to apply for Secular Spring Break 2022 in Louisana for Hurricane Ida Relief. Please register your interest below.

Secular Spring Break is a week-long disaster recovery volunteer experience.  Students will stay at the base camp for the week, meals are provided.  As a volunteer, you will need to cover the cost of your transportation to Louisiana (SSA can help you fundraise) and show proof of COVID vaccination.

Hurricane Ida devastated Louisiana as a category 4 hurricane on August 29, 2021, before continuing to leave a path of destruction through the eastern coast of the United States.

While the levee system that protects New Orleans held during the hurricane, multiple towns outside its protection saw catastrophic flooding and storm surge. Fallen trees and debris litter the streets across Ida’s path. Homes are missing parts of their roofs, fallen trees lie on homes and roads, and some of the most devastated areas are still flooded and remain impassable.